I'm not sure how this happened, but Ari is 10 years old today. I have officially been parenting for a decade! And what an unexpected parenting journey it has been. 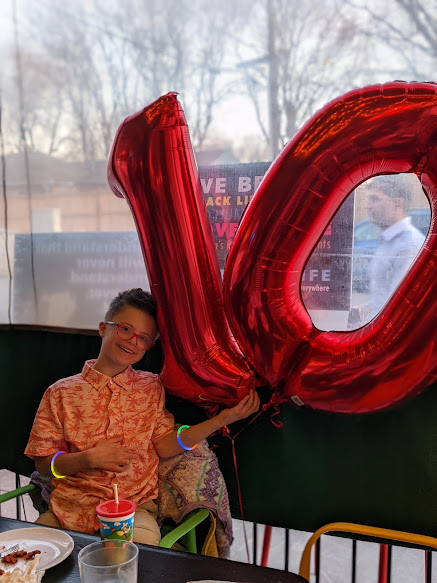 I remember when Ari was in the NICU, the nurse gave us a little card with his inked footprints on it. Being that it was so close to Saint Patrick's Day, it had a green shamrock and a message saying something like "I'm so lucky to have you." What we didn't know was how lucky we were to have him, and all the lessons he would teach us.

He was also born just 6 days before his due date (March 21st). A friend sent me a link to a blog post about a girl with Down syndrome and her family celebrating that date, which is World Down Syndrome Day. Seemed like such an unbelievable coincidence. But then again, I had a strange fear throughout my whole pregnancy that he would have Down syndrome, and dreams about loving him so much even though he wasn't what I was expecting (in my dream, he was born a penguin;). At key moments when I felt like something wasn't quite "right," Three Little Birds would come on the radio and remind me that every little thing was gonna be alright.

Everything has been alright. The fear is gone. The love is strong. He was born exactly as he needed to be. And now he is 10! I am continually amazed by how much he is growing up and maturing. He still has the innocence and candor of a younger child, but he is learning and growing so much everyday. He currently loves singing, (he must have music on whenever there is any silence), science class at school, MLK (he has been asking to go to Georgia to see his grave and he drew him on his Valentine bag), all the sports, all the movies, being independent (he can do it himself!), and, as always, saying silly things and making others smile.

I have had moments of sadness leading up to this birthday, because I feel that my baby is getting too big. But then I got a sobering moment of perspective. I have several friends whose children didn't get to live to see double digits. What they wouldn't give to be able to celebrate their child's tenth birthday.  So instead of sadness, I am appreciating that I have a ten year old who still lives on this earth and graces us with his light.

I don't feel like words can really do justice to all I feel about our remarkable son, and how much he means to us. Happy Birthday to Ari! Now to get the double scoops of ice cream he has been looking forward to !